Apparel can include any item of adornment, but, for the purposes of this sector guide, it is used to refer specifically to clothing, excluding footwear and accessories which are beyond the scope of this guide. In 2013, the global apparel retail market was worth USD 1.3 trillion, based on revenue (Marketline 2014a). Apparel manufacturing specifically has a total value of USD 504 billion (Marketline 2014b) (excluding leather, footwear, and knitted goods).

The apparel sector encompasses a wide range of sub-sectors spanning different tiers of production, and is reliant on international trade and complex, widely distributed supply chains. It is an extremely fragmented industry with no individual dominant companies and is experiencing rapid growth in Asia and emerging markets, though a decline in developed nations (IBIS World 2015).

Apparel can be produced from synthetic, cellulosic (plant-based), animal-based, or hybrid materials, often blended to include more than one of these. Though exact processes vary depending on raw material inputs, vertical integration and processing the basic stages are represented in this sector guide. 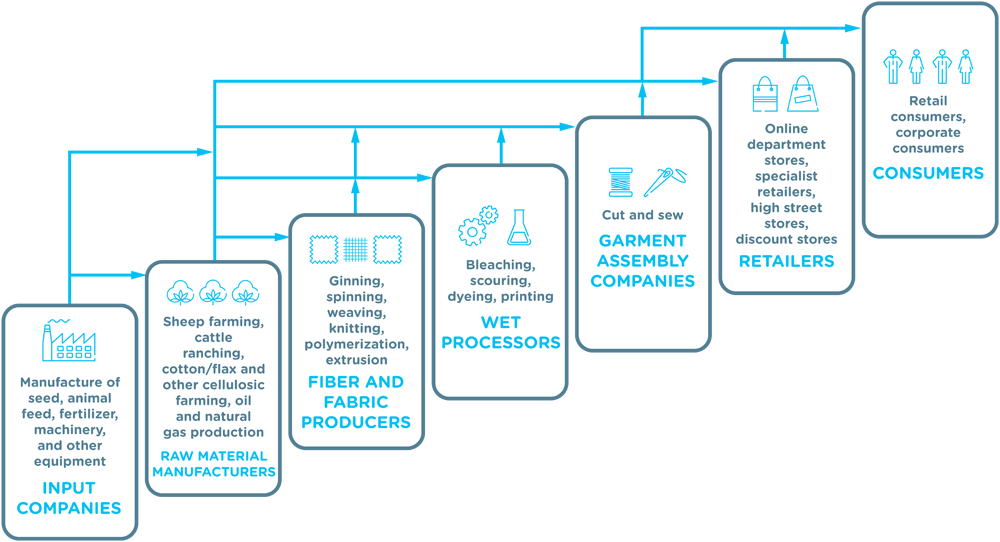 The apparel sector guide was developed through a unique collaborative effort led by Trucost through the IUCN consortium on behalf of the Coalition. This sector guide was funded by IFC with the support of the Swiss State Secretariat for Economic Affairs (SECO) and the Ministry of Foreign Affairs of the Government of the Netherlands.