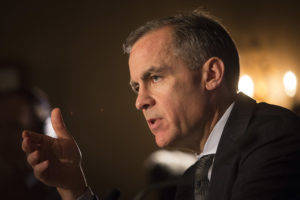 “It’s not just green assets and divestment campaigns or certain things are so brown or black. Every company ultimately has to have a plan for a transition and what the opportunities are and where the risks are,” Carney said in an interview.

…The Canadian banker, who disarmed the British insurance industry in 2015 when, in a speech called “Tragedy of the Horizon,” he warned of their exposure to climate-related events, has been one of the most vocal public figures to push for better supervision and disclosure of climate risk.

The Task Force on Climate-related Financial Disclosures (TCFD), which he launched in 2015, has become a global standard that more than 1,000 companies, financial firms, governments and other organizations have adhered to.

The intentions behind it also chime with a shift of emphasis by another leading central banker, European Central Bank President Christine Lagarde [read more on this here].

…For the time being, the TCFD remains voluntary, and it can be hard to compare and verify the claims of disclosures.

…Carney said November’s COP26 climate talks would also be a good deadline for regulators to map out how to make the TCFD framework compulsory.

“One of the things we will look at ahead at for the COP26 is ‘should we have pathways to make the TCFD mandatory?’ Not overnight, but through listing requirements or securities regulation disclosure standards,” he said.

Such an effort needs to be global, Carney said, encompassing regions laying out their own plans for cutting emissions.”