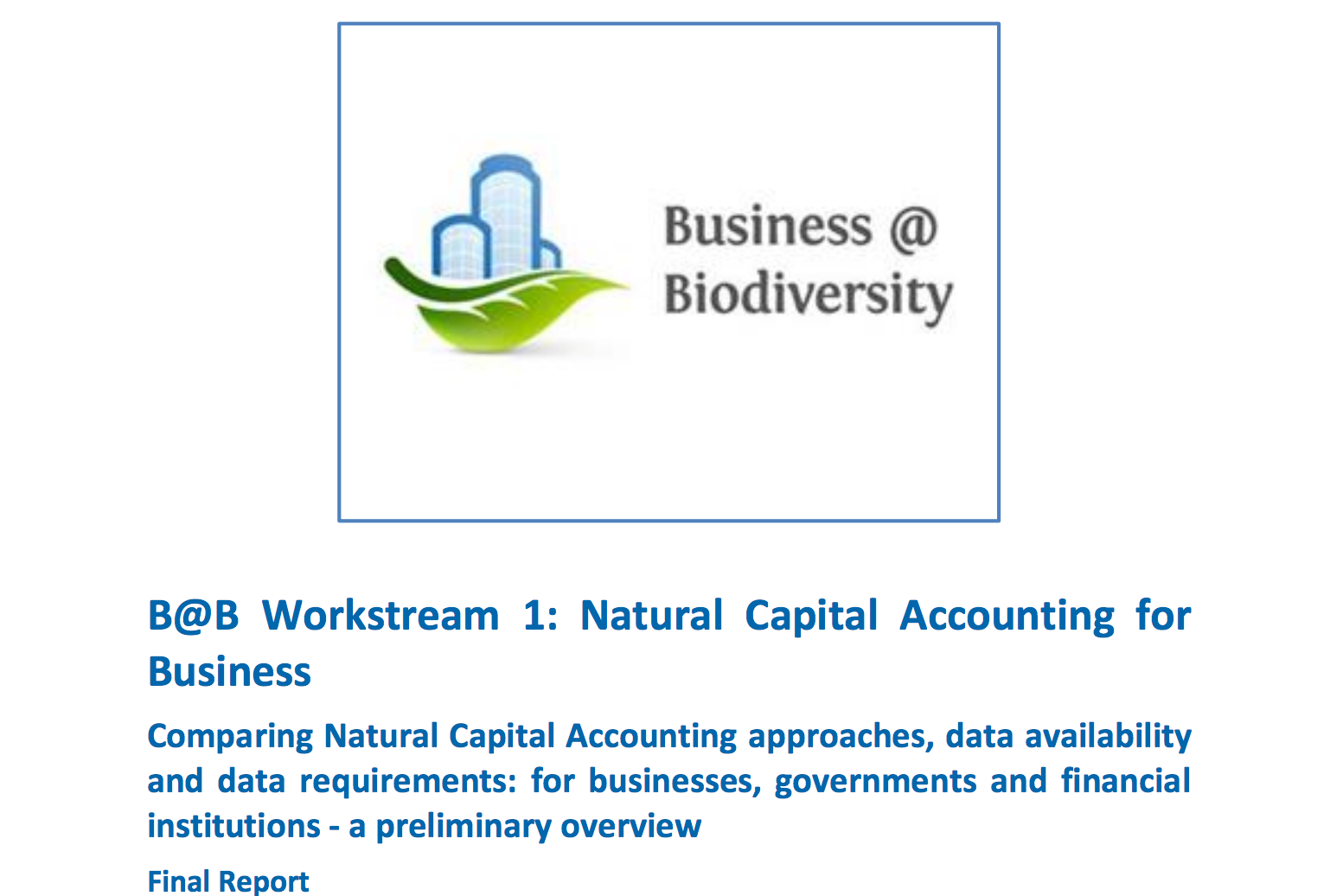 Objective: This report represents the second year’s main output of the Natural Capital Accounting (NCA) for Business Workstream 1 of the EU Business and Biodiversity (B@B) Platform, Phase 2. The original objective of this 2015 work was to: ‘Investigate natural capital accounting linkages between businesses, governments and financial institutions, with a focus on applications (i.e. uses), approaches (e.g. methodologies and tools), data requirements and data sources’. However, during the course of the study, due to its broad nature and complexity, it was decided to focus primarily on comparing natural capital reporting and accounts for the different sectors1 . This is where most of the more significant differences appear to be within NCA approaches. Coverage of tools was dropped, as it is complex and was considered to be addressed by others (e.g. BSR and WBCSD). In addition, because of their different objectives, financial institutions (FIs) have been split into ‘Public FIs’ and ‘Private FIs’.

Approach: The outputs of this study are based on limited desk research, a questionnaire survey and a workshop (held in the European Commission, DG Environment premises in Brussels on July 6 th 2015). Details of all contributors to the study through the questionnaire and workshop are detailed in Annex 1.

Definitions and scope: For the purposes of this study, NCA is taken in its broadest sense to cover all forms of decision-making and reporting associated with the environment. Similarly, whilst the report deals with ‘natural capital’ per se, it effectively covers all environmental issues, but the main focus of the study is on biotic or living natural capital (i.e. biodiversity, but also water and soil) rather than non-living non-renewable elements such as fossil fuels and minerals. We also use the term ‘other environmental impacts’ loosely to mean environmental outputs or ‘residuals’ such as GHGs, NOx, noise and waste etc. Taken together, natural capital and other environmental impacts effectively equate to what is covered by the UN’s System of Environmental-Economic Accounting – SEEA (United Nations, 2014a and 2014b).

Comparison of NC reporting and accounts: Part of the more detailed review of ‘reporting and accounts’ for natural capital involved determining which parameters are generally covered in physical and monetary terms in some of the main reporting and account based approaches. As shown in Table 1.1, in terms of businesses, the assessment covers the CDSB2 and GRI3 business reporting frameworks, and the EP&L4 and CNCA5 sets of accounts. These are also relevant to private FIs, although much less so for the CNCA6 . In terms of government accounts, the assessment covers the UN System of Environmental-Economic Accounts (SEEA) Central Framework and Experimental Ecosystem Accounting, which are also of great relevance to public FIs.

Key messages arising from the assessment are that: