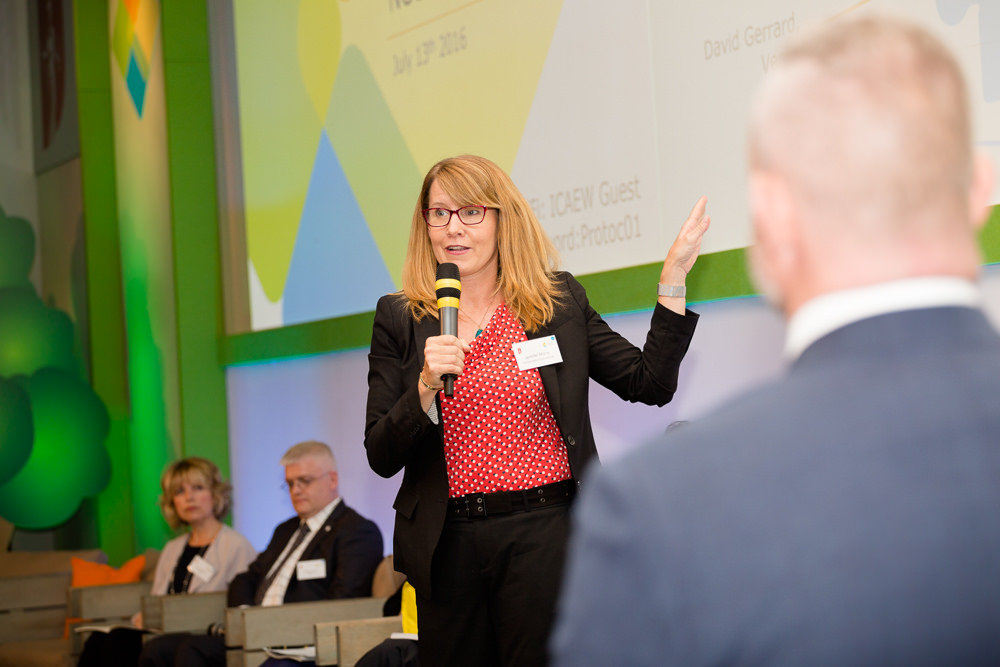 Jennifer Morris speaking at the launch of the Natural Capital Protocol.

“We’re delighted for Sanjayan, Jennifer and Sebastian, and greatly look forward to continuing this important work alongside them and the rest of the team at Conservation International.

We’re also happy to learn that Peter Seligmann, who has always been extremely supportive, will be staying on as Chairman of the Board, and we thank him for his ongoing support and vision.” – Mark Gough, Executive Director, Natural Capital Coalition.

“Today the stakes for the future of our planet and human well-being could not be higher, but I have great faith in passing the torch to a world class leadership team,” said Seligmann on behalf of CI’s Board. “Creating a healthier, more prosperous planet is an urgent task, and requires a diverse team. Sanjayan is a field-tested conservation leader with a remarkable ability to bring people together and inspire action. I have enormous confidence in his vision and his wisdom.”

Seligmann continued, “Jennifer Morris and Sebastian Troëng are gifted leaders. Jennifer is a first-rate expert in both conservation finance and conservation delivery and has guided our operations and field programs for close to two decades. Sebastian began in our marine program, led the Moore Center for Oceans and Science and now leads CI’s Americas Division. These are exceptional people and I am grateful that they are taking on expanded roles at CI. This organization has been my life’s work and I’m honored to be able to continue in my role as chairman of the board and to support its bright future.”

“It is both a privilege and deeply humbling to step into the role of chief executive officer,” said Sanjayan. “Peter Seligmann’s founding vision, that people need nature to thrive, created a global movement that has helped change the trajectory of our planet. I’m honored to partner with Jennifer Morris, our new president, Sebastian Troëng, our new executive vice president, and all of CI’s talented staff on the journey ahead.”

“The board is delighted in this new leadership team, which already has a strong track record of creating solutions to some of today’s most pressing global challenges,” said Rob Walton, chairman of Conservation International’s executive committee. “Each one of these leaders are well-positioned to continue Conservation International’s legacy of delivering on its mission to protect nature for our benefit today and the benefit of generations to come.”…”