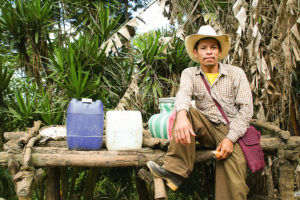 This article was originally published on Climate Change News.

“By prioritising the recovery of natural capital and ancestral practices, communities in Guatemala are strengthening their resilience to climate change-induced droughts.

The ‘Dry Corridor’ is an ecological region of Central America, which encompasses some of Guatemala, and is particularly vulnerable to increasingly irregular rainfall, suffering from both severe droughts and flooding. As a result, poverty and food insecurity have become major issues for families and communities living in the area.

Over recent years, communities in the country’s dry corridor have established practices to be more resilient to variable weather with local self-sustainability being prioritised.

A project, implemented by the Commonwealth Copanch’orti’ and supported by the Inter-American Development Bank, piloted a series of activities to assist with adaptation efforts. Launched in 2013, the project’s primary aim was to put power back into the hands of local communities, by giving them the tools needed to adapt and become resilient to climate change.

…Seven years on, and communities in the region have improved their resilience to climate change. This promotes the idea of self-sustainability and acknowledges the importance of local ownership.

…“A project of this nature promotes the livelihoods of rural families” said Sydney Samuels, former Minister of Environment and Natural Resources. “It also helps to reduce chronic malnutrition in areas of desertification, presenting itself as an example for other regions”.

The model has proven to be a successful public investment with high socio-economic and environmental returns, and its achievements has raised interest about expansion.”

Read on at: Climate Change News

The Birds That Guard Brunch ›