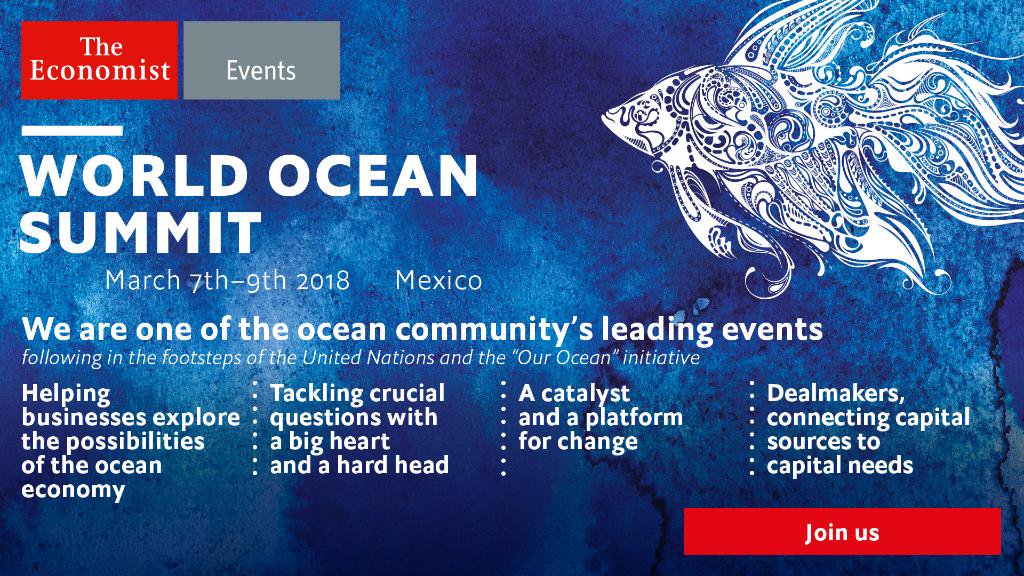 This text was taken from the World Ocean Summit 2018.

“Since 2012, The Economist Group has hosted the World Ocean Summit, leveraging our convening power and reputation for quality, objective journalism to bridge the sometimes dissonant perspectives of business, government and civil society in how we use our troubled seas. The vision is an ocean in robust health and with a vital economy; the purpose, to accelerate the transition to the sustainable use of the ocean.

The ocean is in trouble. Across the world, humans have effected dramatic change upon the seas. One thing is certain: our current course is unsustainable. Yet the ocean remains a vital resource with the potential to generate enormous economic growth. Balancing human activity with the long-term health of the ocean is essential.

The last year has been a decisive one for the ocean. In June the United Nations held its first conference on the ocean to discuss the implementation of an ocean-specific sustainable development goal. The COP23 climate change meeting presented an opportunity to usher in swifter and more ambitious action than we have seen so far. Companies, governments and individuals have made commitments to the ocean—many of which were unveiled at the World Ocean Summit 2017.

If 2017 was the year of big promises, 2018 must be about delivery. The World Ocean Summit, the most diverse and important global gathering on the ocean, will bring together political leaders and policymakers, heads of global business, scientists, NGOs and multilaterals for a frank and future-oriented discussion on how to turn these pledges into reality. Which initiatives have borne fruit, and which require reassessment? How can government and industry turn pledges into reality?

Since 2012 the World Ocean Summit has sought to focus the sometimes divergent perspectives of business, government and civil society on how we use our troubled seas. In 2018 the World Ocean Summit will expand into a wider, more ambitious World Ocean Initiative. Its vision will be of an ocean in robust health and with a vital economy; its goal to accelerate the transition to sustainable use of the ocean.”

Read on and register here.