The Natural Capital Protocol project has pioneered a unique and collaborative 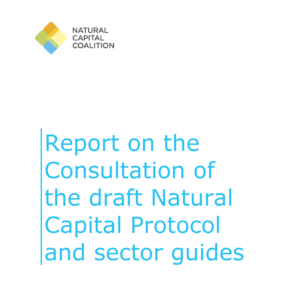 development approach. It brought together the key stakeholders at the beginning of
the process to work together on producing a global standardized framework that could be supported by the entire community.

This document sets out the consultation process and provides a summary of the 3,230 responses received. It also highlights how the comments were addressed and incorporated in the final Protocol and accompanying sector guides. All responses were considered when making decisions about changes from the draft versions. However, we have not addressed each one individually in this document. Instead we grouped them by the major topic or theme. As expected from a consultation of this size, there were some contrasting opinions presented from different stakeholders and therefore not everyone’s comments can be accommodated and the development team have had to make decisions and prioritize the changes that were made. The consultation ran from November 23rd 2015 to February 26th 2016. This document was issued on July 13th 2016 to accompany the global launch of the final Protocol and sector guides.