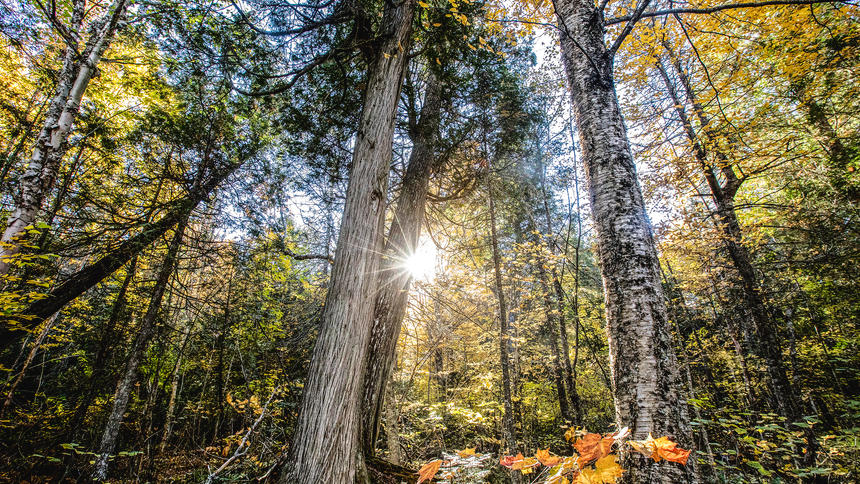 Photo by Derek Montgomery for the Nature Conservancy.

This article was originally published on The Bemidji Pioneer.

“Global explorer Will Steger was hiking the North Shore ridge in 1996, at a vista along the Superior Hiking Trail, when he noticed something in the distance, off to the northwest.

“It almost looked like foothills; high country with big trees. I had never seen anything like it before up there and it just intrigued me,” Steger said in an interview on Tuesday.

He returned later with a map and compass and bushwhacked into the forest to see up close what he had seen from afar.

He found giant sugar maples, white cedar, yellow birch and white spruce that were somehow spared from lumberjacks’ axes and saws over the past 150 years.

“I was just blown away. After you walked through the swamps and creeks and alder brush you walk into this incredible maple uplands where you could walk with moccasins and not get them wet. The trees are so big. It’s virgin forest,” Steger said.

Steger returned home and started making phone calls. He first found 80 acres for sale where the big trees were standing, took out a loan and bought the land. Later he found another 160 acres for sale in the same area and, with another loan, bought that, too.

“I didn’t know what I was going to do with it. But I knew it needed to be protected,” Steger said…”

Read on at: The Bemidji Pioneer.

‹ Natural Capital, Or the Unnatural Preoccupations of IFRS