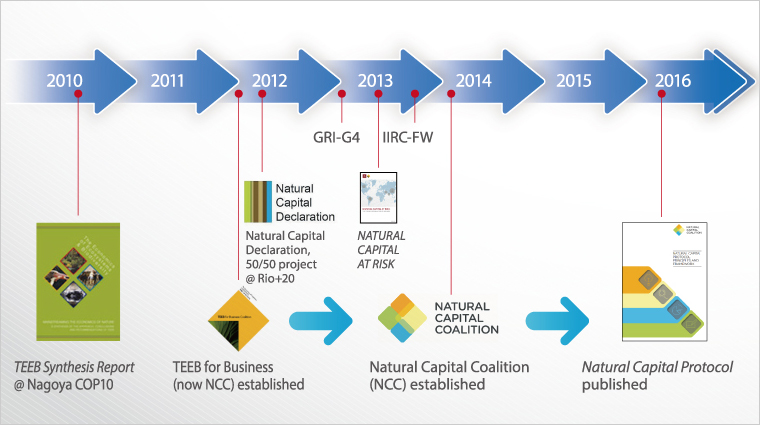 This article was originally published on Toshiba.

The Economics of Ecosystems and Biodiversity (TEEB), which was published in 2010, recommends disclosure of biodiversity information in corporate accounting reports. It also proposes setting “no net loss” and “net positive impact” as targets as well as considering an offset system. Furthermore, the Natural Capital Declaration: (NCD) prepared in 2012 by the United Nations Environment Program Finance Initiative (UNEP FI) requires that natural capital, which generates several trillions of dollars annually, be evaluated in the same way as social and financial capital. “The 50/50 Project,” which was launched by the World Bank in 2012, also aims to incorporate natural capital into government accounting in 50 countries and corporate accounting at 50 companies.

Moreover, Natural Capital at Risk, a report published in 2013 by the TEEB Business Coalition (now the Natural Capital Coalition), proposes that companies evaluate the effects of their operations and supply chain activities on natural capital.

Meanwhile, the International Integrated Reporting Framework (FW) drafted by the International Integrated Reporting Council (IIRC) and the Sustainability Reporting Guidelines G4 drafted by the Global Reporting Initiative (GRI) were published one after the other in 2013. The IIRC-FW specifies natural capital as one of six capital assets that support corporate activities. In addition, the GRI-G4 recognizes economic assessments of natural capital as an important information disclosure item, requiring companies to implement appropriate measures.

Against this backdrop, Japan’s Ministry of the Environment held a public meeting in March 2015 to discuss natural capital accounting. Toshiba personnel attended the meeting. At the meeting, experts in different areas—including scholars, institutional investors, consultants, and business managers—actively exchanged views about the needs, utility, and future of natural capital accounting from their professional perspectives and had lively discussions.

Read on at: Toshiba.

‹ Costa Rica Launches Site for the Accounting of its Natural Resources

The Role of Natural Capital in Catchment Management ›