Valuing the Invaluable in Business 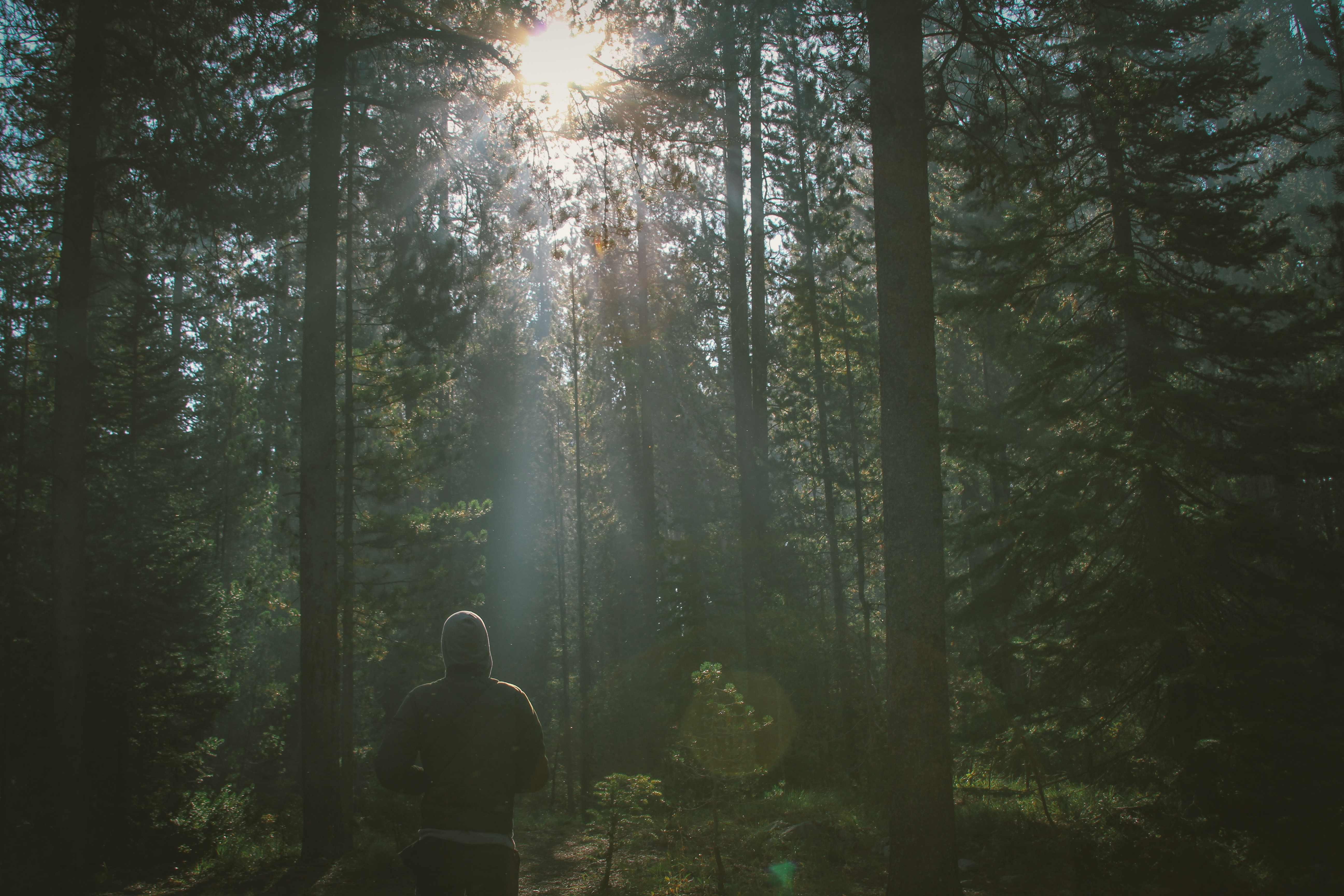 This article has been submitted as part of the Natural Capital Coalition‘s series of blogs on natural capital by Ivo Mulder, Economics Advisor, REDD+.

Putting an economic value on our natural environmental is difficult, both from an ethical and from a technical perspective. Nature is therefore often regarded as ‘priceless’.

However, in our globalized economic system, the value of nature’s multitude of critical services is subsequently translated as “0”. This is true for services such as crop pollination, water purification, climate regulation and carbon sequestration, and the list goes on.

Many people know in the back of their minds that as we continue to overuse our forest ecosystems, deplete soils, and overuse our water resources, at some stage the “rubber will hit the road”.

In other words, there will be real economic and financial impacts. For the private sector then, the race is on to identify how changes in our natural environment can positively or negatively affect the costs and revenues of a business.

We are entering an era where water scarcity, deforestation, soil degradation and biodiversity loss will increasingly incur real costs or affect revenues by companies caught unaware. Take the Malaysian palm oil producer ‘IOI Corporation’, whose shares has been on a roller coaster.

On 1 April 2016, the Roundtable on Sustainable Palm Oil (RSPO) suspended the corporation due to failure to prevent its subsidiaries from illegal deforestation in Indonesia. As a result, 27 major corporate buyers – including Cargill – suspended and terminated relations with IOI and its share price fell 17%. Then on 5 August 2016, shares rallied 5% on the news that the RSPO will lift its suspension effective 8 August 2016. Moody’s – a credit rating agency – however maintains a “negative credit outlook” on its debt. (See research conducted by Chain Reaction). 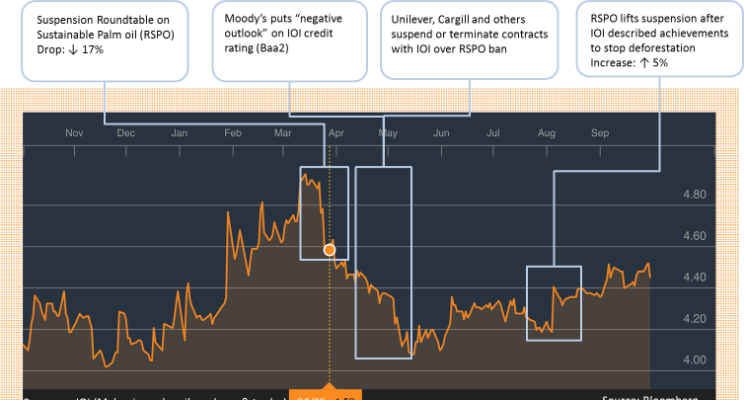 Take another example. The south of Brazil experienced a massive drought in 2015, severely affecting São Paulo state, which accounts for a third of Brazil’s economy and 40 percent of its industrial production. The agricultural sector – including production of coffee and sugar (ethanol) – has been seriously affected. An article in the Guardian highlighted that production of Arabica coffee beans fell 15% in 2014, which, (given that Brazil is by far the biggest producer globally), pushed up the global price of the commodity by almost half.

While rising population density and higher water consumption are among the reasons cited, there is increasing evidence that continued deforestation in the Amazon leads to decreased rainfall. Because of the drought, the Brazilian water firm Sabesp also saw the outlook of its credit rating changed to negative.

These are just two among a growing number of examples that show how the deforestation, forest degradation and other environmental issues can be financially material for companies, and therefore, for those who have put money into them, such as stock and bondholders as well as banks and other investors.

So, if you understand as a business that this is real and relevant for your operations, what tools are out there for the private and financial sector to understand the extent to which your company can be affected by natural capital risks?

A good starting point is the Natural Capital Coalition, which has just released aProtocol that guides companies through nine steps to identify, measure and value their impacts and dependencies on the natural environment. It has also issued two sector guides for food & beverages and for the apparel sectors. Specific sector guides for more sectors will follow.

If your company is specifically or exclusively interested in understanding the financial impacts related to natural capital, then the Natural Capital Declaration (NCD) is developing a range of tools that directly integrates natural capital in credit risk analysis of loans and bonds, as well as in market valuations of companies listed on stock exchanges.

The basic premise of any of these tools is that they look in principle at costs and revenues, and how to embed these in standard financial metrics such as EBITDA (earnings before interest, tax, depreciation and amortization).

A water risk tool target (equities) developed and released in 2015 by Bloomberg and the NCD enables financial professionals to gauge the extent to which water scarcity affects earnings and potentially the share price of mining stocks using a standard discounted cash flow model (DCF). It found for example in the case Antofagasta, a copper mining company, that the difference between free cash flow in a business-as-usual scenario in 2021 and when taking water risks into account, is about 40% or US$ 2.5 billion. This is large enough to affect equity value and the projected share price.

The NCD has also co-developed a water risk tool focused on corporate bonds. It found that water stress could have a significant impact on credit ratios. In the case of South African utility, Eskom, the model predicts that its debt/EBITDA ratio, (which is an important yardstick for the value and riskiness of corporate bonds), will almost triple if the full cost of its water use is internalized.

What these two tools have in common is that they are Excel-based, free to download from the internet, focus exclusively on the financial impacts of natural capital risks, and are customizable meaning that anyone can override the assumptions in the model and add new companies.

Nevertheless, this story is not only about risks and credit downgrades. There are major business opportunities for companies and investors that know how to turn a healthy profit in a world where resource scarcity is a reality and where greenhouse gas emissions need to get down fast, including in relation to forestry, agriculture and other land use.

The market for green bonds is rapidly expanding with close to US$ 700 billion of climate-aligned bonds outstanding in 2016 (of which US$ 118 specifically labelled green bonds). There are plans to issue the first green bond that would specifically finance commercially viable projects that have a positive effect on sustainable landscape management. This is being made possible thanks to a growing drive by consumer goods companies to work towards ‘zero-net deforestation’ commodity supply chains, effectively creating demand for private finance that leads to lower or zero-net forest impacts. As of June 2016, 579 companies had made pledges to remove forest destruction from their supply chain.

The UN-REDD Programme is also playing a very active role by supporting partner countries such as Panama, Costa Rica, Kenya and others to identify how the private sector can contribute to achieving REDD+ results.

The take away message is that changes in our natural environment – deforestation, water scarcity and greenhouse gas emissions building up in our atmosphere – are real and if left unaddressed will affect many businesses in a vast multitude of ways. On the other hand, those who are well prepared and know how to navigate changes in consumer and investor preferences related to natural capital, will be much better positioned to weather the storm.

Ivo Mulder has over ten years of professional experience working for UNEP, private consulting firms and with NGOs on building the business case for companies and governments to deal with challenges related to climate change, water scarcity and ecosystem management. He has published more than forty reports, blogs and articles.

Over the past two years, he has contributed to building the economic case for reduced deforestation and forest degradation as part of the UN-REDD Programme, including through economic valuation studies, fiscal policy analysis and outlining how businesses can decouple revenue growth from forest impacts. More recently, Ivo is involved in setting up new finance mechanisms with the aim of channelling private capital to activities that contribute to achieving REDD+ results.

‹ Can Circular Economy be the “Rosetta Stone” for Making the Natural Capital Investment Business Case?

The Potential of the Natural Capital Protocol to Transform Business Models ›